What is a Chemical Weapon?

A Chemical Weapon is a chemical used to cause intentional death or harm through its toxic properties. Munitions, devices and other equipment specifically designed to weaponise toxic chemicals also fall under the definition of chemical weapons.

A common conception of a chemical weapon (CW) is of a toxic chemical contained in a delivery system such as a bomb or artillery shell. While technically correct, a definition based on this conception would only cover a small portion of the range of things the Chemical Weapons Convention (CWC) prohibits as ‘chemical weapons’.

Under the CWC, the definition of a chemical weapon includes all toxic chemicals and their precursors, except when used for purposes permitted by the Convention – in quantities consistent with such a purpose.

Toxic chemicals and their precursors

Toxic chemicals are defined as ‘any chemical which through its chemical action on life processes can cause death, temporary incapacitation or permanent harm to humans or animals’.

This includes all such chemicals, regardless of their origin or of their method of production, and regardless of whether they are produced in facilities, in munitions or elsewhere.

Precursors are chemicals that are used for the production of toxic chemicals.

Any munitions or devices specifically designed to inflict harm or cause death through the release of toxic chemicals.

Among these could be mortars, artillery shells, missiles, bombs, mines or spray tanks.

Equipment ‘directly in connection’ with munitions and devices

Any equipment specifically designed for use ‘directly in connection’ with the employment of the munitions and devices identified as chemical weapons.

Examples of CWs include, but are not limited to:

A toxic or precursor chemical may be defined as a chemical weapon depending on its intended purpose.

A toxic or precursor chemical is defined as a chemical weapon unless it has been developed, produced, stockpiled or used for purposes not prohibited by the Convention.

Any chemical intended for chemical weapons purposes, regardless of whether it is specifically listed in the Convention or its Annexes (including the three schedules of chemicals) is considered a chemical weapon.

The CWC does not expressly state what ‘chemical weapons purposes’ are. Rather, it defines purposes that are not prohibited by the Convention.

A toxic chemical held by a State Party in agreement with the “Principle of Consistency” must be produced, stockpiled or used for a legitimate purpose, and be of a type and quantity appropriate for its “peaceful” purpose.

Any chemical intended for chemical weapons purposes, regardless of whether it is specifically listed in the Convention, its Annexes or the three schedules of chemicals, is considered a chemical weapon.

While providing for the prevention of production or stockpiling of chemical weapons, the definition of chemical weapons does not result in restrictions of any State Party’s right to produce and use chemicals for peaceful purposes or to acquire and retain conventional weapons and their associated delivery systems.

Definitions Related to the CWC

A riot control agent is defined as any chemical not listed in a schedule which can produce sensory irritation or disabling physical effects rapidly in humans and which disappear within a short time following termination or exposure.

The use of riot control agents as a method of warfare is prohibited by the CWC.

A toxic chemical and delivery system, for example, may be stored separately, each in and of itself less than a fully developed weapon — but each are still considered chemical weapons under the Convention.

Any chemical reactant which takes part, at any stage and by whatever method, in the production of a toxic chemical. This includes any key component of a binary or multicomponent chemical system.

For the purpose of implementing this Convention, precursors which have been identified for the application of verification measures are listed in Schedules contained in the Annex on Chemicals.

Dual-use describes chemicals or equipment that can be used for peaceful civilian and commercial purposes, but can also be used in the creation of weapons or as weapons.

The prohibition of the use of herbicides as a method of warfare is recognised in the CWC Preamble. However, herbicides are not defined specifically in the Convention.

Herbicides that are intentionally used to harm humans or animals through chemical action on life processes could be considered a chemical weapon under the general purpose criteria.”

Central Nervous System acting chemicals, which are sometimes referred to as incapacitating Chemical Agents (ICAs), are not defined or mentioned by name in the Convention. The Convention does refer to toxic chemicals that can cause, inter alia, ‘temporary incapacitation’.

The general purpose criterion still holds to the extent that chemicals considered CNS-acting meet the definition of toxic chemicals.

The development, production and stockpiling of toxins for purposes of warfare are prohibited under both the CWC and Biological Weapons Convention (BWC). Like the CWC, the BWC also requires States parties that possess toxin weapons to destroy them.

It is possible to synthesis many types of toxins in laboratories without harvesting the organisms that produce them in nature. Moreover, a number of toxins are also synthetic dual-use chemicals, meaning that under the CWC they can be produced in the quantities required for legitimate activities.

Old chemical weapons of the first category may be ‘destroyed or disposed of’ as toxic waste in accordance with the relevant State Party’s national laws after the OPCW Secretariat has confirmed that they were indeed produced before 1925.

Those weapons that fall into the second category of old chemical weapons are to be destroyed in accordance with the same conditions as other chemical weapons, though the time limits and the order of destruction can be changed, subject to approval by the Executive Council.

Guidelines for determining whether weapons in this category have deteriorated enough to be unusable, however, have yet to be decided, though efforts to do so are ongoing. Categorisation of such weapons therefore remains problematic. 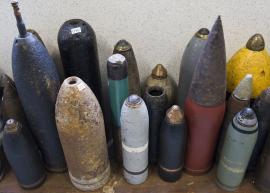 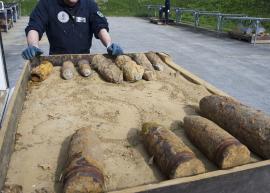 Inflicting injury mainly on the respiratory tract, choking agents irritate the nose, throat, and especially the lungs. When inhaled, these agents cause alveoli, air sacs in the lungs, to secrete fluid, essentially drowning those affected

Mode of Action
Absorption through lungs

One of the most common chemical weapon agents, these oily substances act via inhalation and contact, affecting the eyes, respiratory tract, and skin, first as an irritant and then as a cell poison. Exposure to blister agents cause large and often life-threatening skin blisters which resemble severe burns, and often results in blindness and permanent damage to the respiratory system.
Although casualties are high, deaths represent a small percentage.

Effects
Cells’ ability to use oxygen is impaired, leading to damage to vital organs including those of the central nervous system, cardiovascular system and respiratory system

Nerve agents block an enzyme called Acetylcholinesterase (AChE) in the nervous system. This causes the accumulation of a neurotransmitter between nerve cells or across synapses leading to hyper-stimulation of muscles, glands and other nerves. Nerve agents are highly toxic with rapid effects. They act primarily by absorption through the skin and lungs. Nerve agents are divided into two main groups: G-series agents and V-series agents, named for their military designations. Some G-agents, particularly tabun and sarin, persist in the environment for only short periods. Other agents, such as soman and cyclosarin, persist longer and present a greater threat to the skin. V-agents are extremely potent, with only milligrams needed to cause death, and persist for long periods of time in the environment.

Riot control agents are intended to temporarily incapacitate a person by causing irritation to the eyes, mouth, throat, lungs, and skin.

Riot control agents, such as tear gas, are considered chemical weapons if used as a method of warfare. States can legitimately possess riot control agents and use them for domestic law enforcement purposes, but states that are members of the Chemical Weapons Convention must declare what type of riot agents they possess.

Mode of Action
Absorption through lungs, skin and eyes