“For its extensive efforts to eliminate chemical weapons”

The 2013 Nobel Prize for Peace was awarded to the Organisation for the Prohibition of Chemical Weapons on 10 December 2013 for ‘its extensive efforts to eliminate chemical weapons’. The Nobel Committee stated: ‘The conventions and the work of the OPCW have defined the use of chemical weapons as a taboo under international law. Recent events in Syria, where chemical weapons have again been put to use, have underlined the need to enhance the efforts to do away with such weapons. (…) By means of the present award to the OPCW, the Committee is seeking to contribute to the elimination of chemical weapons.’

The Nobel Peace Prize has been awarded since 1901.

The OPCW Director-General recognised the contributions of former staff members of the Preparatory Commission and the Technical Secretariat by giving them a certificate marking the historic achievement of the OPCW winning the 2013 Nobel Peace Prize.

Working Together for a World Free of Chemical Weapons, and Beyond 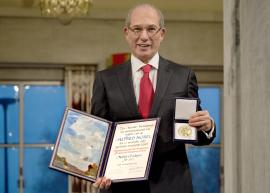 Former OPCW Director-General with the Nobel Peace Prize and certificate.

For the 2013 Nobel Peace Prize, the Nobel Committee had received 259 nominations – the highest number ever.

Peace is one of six Nobel Prizes, the other categories include: Physics, Chemistry, Physiology or Medicine, Literature and Economics.

The inscription is in Latin: Pro pace et fraternitate gentium (For peace and fraternity among peoples)

With each Nobel Medal, a diploma in the form of a unique artwork is created by Swedish and Norwegian artists and calligraphers and presented to the Laureate.The OPCW’s diploma’s artwork was created by Jan Erik Willgohs, the calligrapher was Inger Magnus, and it was bound by Julias Johansen.

In 2014, the Organisation for the Prohibition of Chemical Weapons established the OPCW–The Hague Award to recognise and honour individuals and institutions that have made an outstanding contribution towards the goal of a world permanently free of chemical weapons; such contributions include promoting the peaceful uses of chemistry and preventing its misuse. The Award is a tribute reflecting the honour bestowed upon the OPCW for winning the Nobel Peace Prize in 2013 and is supported by a generous financial contribution from the City of The Hague.

The fund is supplemented by contributions from the City of The Hague. The OPCW–The Hague Awards are made available with a maximum annual monetary prize of €90,000. The Award is accompanied by a certificate and a commemorative medal featuring both the OPCW and the coat of arms of the City of The Hague.

The fund is supplemented by contributions from the City of The Hague.